The urban center designed by Kasyapa is centered around the Sigiriya  rock, which rises about 200  meters above the surrounding plain. Extending east and west from the rock are two fortified precincts; the western precinct (to the left above), which encompasses 90 hectares, and the eastern precinct which covers 40 hectares. The western area was the royal park area, a symmetrically-designed pleasure garden with elaborate water-retaining structures, as well as surface and subsurface hydraulic systems. It is surrounded by three ramparts and two moats, forming a rectangular area whose inner precincts measure about 700 meters from east to west and 500 meters from north to south. On the other side of the rock, the eastern area appears to have been a ceremonial precinct with a large central pavilion as its only permanent structure. Kasyapa and his royal family lived their lives within these walls. Moving inward from the two precincts in an ever-ascending fashion are a series of boulder gardens and then terraced gardens, leading to the entrance to the Sigiriya rock. Access to the rock is gained via a long passageway that begins on the west side of the terrace gardens, and winds northward along the Mirror Wall to the Lion Platform. From there it is straight up the north face of the rock to the royal palace and gardens at the top of Sigiriya rock. To the east of the complex is the largely unexcavated outer city where the subjects of Kasyapa dwelt.

Continuing up the rock, a flight of limestone steps climbs steeply up to the Lion Platform, a large spur projecting from the north side of the rock, just below the summit (vendors sell fizzy drinks here at slightly inflated prices). From here, a final staircase, its base flanked by two enormous paws carved out of the rock, leads up to all that remains of a gigantic lion statue – the final path to the summit apparently led directly into its mouth. Visitors to Kassapa were, one imagines, suitably impressed by this gigantic conceit and by the symbolism – lions were the most important emblem of Sinhalese royalty, and the beast’s size was presumably meant to reflect Kassapa’s prestige and buttress his questionable legitimacy to the throne.

The wire-mesh cages on the Lion Platform were built as refuges in the (Fortunately unlikely) event of bee attacks – you can see bees’ nests clinging to the under said of the rock overhang above, to the left of the stairs. The whole section of rock face above re is scored with countless notches and grooves which once supported steps up to the summit: in a supreme irony, it appears that Kassapa was afraid of heights, and it’s thought that these original steps would have been enclosed by a high wall — though this isn’t much comfort for latter-day sufferers of vertigo, who have to make the final ascent to the summit up a narrow iron staircase attached to the bare rock face. 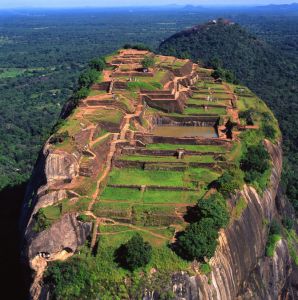 The summit of the Sigiriya rock is in the form of a stepped plateau with a total extent of more than 1.5 hectares.The palace was the center of the royal city. Lying about I80 m above the surrounding plain and 360 m above mean sea level at its highest point, it is not only the loftiest and inner-most precinct of the Sigiriya complex, but it is also the geometrical centre  of the ancient modular grid on which the plan of Sigiriya is based. The central north-south and east-west axes of the entire complex intersect near the mid-point of the palace area.The earliest surviving palace in Sri Lanka, with its layout and basic ground plan still clearly visible, it provides important comparative data for the study of Asian palace forms.The palace complex divides into three distinct parts: the outer or lower palace occupying the lower eastern part of the summit; the inner or upper palace occupying the high western section, and the palace gardens to the south. The three sectors converge on a large and beautiful rock-cut pool bordered on two sides by a stone-flagged pavement. A marble-paved walk runs down the centre of the complex between the outer and the inner palace, forming an axial north-south corridor.

The Story of Sigiriya

King Dhatusena had two sons and a daughter. The elder son Kasyapa, according to the Chulavamsa, was born to a mother of unequal birth but Moggallana the younger son was born to a mother of equal caste. He loved his charming daughter and gave her in marriage to his sister’s son and made that son the commander in chief. The commander in chief had whipped his wife on her thighs, but the reason for this punishment is not known. When king Dhathusena saw the blood stained garment of his daughter and heard of the whipping, he flew into a rage, as he loved his daughter. In retaliation, the king got the mother of the commander in chief “burned naked”. It is shocking that he burnt his own sister because the sister’s son had beaten his wife who was the king’s own daughter.

This incident is inexplicable in a great king like Dathusena. It led to the tragic end of both Dhatusena and Kasyapa. Dhatusena built 18 Viharas for the Theravada monks and also constructed 18 irrigation tanks for the people. Above all, he built the famous Kala Weva, which is one of the greatest irrigation works of the Sinhalese and it is functioning in all its glory, even today. His service to the community of monks manifested in the repair and reconstruction of a large number of old temples to such an extent that the author of the Chulavamsa compares him to king Dharmasoka, the great of India.

However, Dhatusena made a mortal enemy of Migara the sister’s son, who vowed to take revenge for the murder of his mother. Migara was able to influence prince Kasyapa to turn against his father because Kasyapa’s mother was not from a royal family and he was not entitled to the kingdom which would have gone to his younger brother Moggallana. Therefore, Migara who became a close friend of Kasyapa made him seize the kingdom by force and imprison his father. When this happened Moggallana fled to India in fear.

Later, Migara told Kasyapa that his father was hiding treasures to be given to Moggallana. King Dhatusena was asked to reveal where the treasure was hidden. King Dhatusena, after some hesitation, asked the messengers to take him to Kala Weva and promised to show the treasures. At Kala Weva, he showed the great irrigation tank as his treasure to the king’s messengers. When the king heard of this, he became very angry, and asked the Senapathi to kill his father. The Chulavamsa says that it was the Senapathi who stripped the king naked and bound him to a wall and closed it up with clay. The commander in chief had his revenge in this brutal manner.

The paintings would have covered most of the western face of the rock, covering an area 140 metres long and 40 metres high. There are references in the graffiti to 500 ladies in these paintings. However, many more are lost forever, having been wiped out when the Palace once more became a Monastery so that they would not disturb meditation. Some more frescos different from the popular collection can be seen elsewhere on the rock surface, for example on the surface of the location called the "Cobra Hood Cave".

Although the frescoes are classified as in the Anuradhapura period, the painting style is considered unique, the line and style of application of the paintings differing from Anuradhapura paintings. The lines are painted in a form which enhances the sense of voluminousness of figures. The paint has been applied in sweeping strokes, using more pressure on one side, giving the effect of a deeper colour tone towards the edge. Other paintings of the Anuradhapura period contain similar approaches to painting, but do not have the sketchy lines of the Sigiriya style, having a distinct artists' boundary line.

Beyond the fresco gallery the path clings to the sheer side of the rock and is protected on the outside by a 3m high wall.This wall was coated with a smooth glaze upon which visitors of 1000 years ago felt impelled to note their impressions of the women in the gallery above   or so says local legend. The graffiti were inscribed between the 6th and 14th centuries, and 685 of them have been deciphered and published in a two volume edition, Sigiri Graffiti, by Dr S Paranavitana. The graffiti are of great interest to scholars because they show the development of the Sinhala language and script, and because they demonstrate an appreciation of art and beauty. You'll have to look hard bevond the modern mess to see the ancient messages.
One typical graffito reads, The ladies who wear golden chains on their breasts beckon me. As I have seen the resplendent ladies, heaven appears to me as not good/ Another, by a female scribbler, reads,
"A deer eyed young woman of the mountain side arouses anger in my mind. In her hand she had taken a string of pearls and in her looks she has assumed rivalry with us"
The Mirror wall

The term Mirror Wall is an attempt at translating the word used by the ancient writers. They used the term Kat Bitha for this wall enclosing a walk or gallery leading up to the Lion Staircase
According to the Sigiri Graffiti  The lime plaster of the brick masonry wall had been so highly polished, that it had reflected the paintings on the opposite rock wall. Today, fifteen centuries later, the shine on this wall can still be seen.

A total of nearly 1500 writings have now been deciphered. The first study and publication was by Prof. Senerat Paranavitana which itself is a masterpiece of the literary, social and creative activities of the period, the earliest recorded poetry found in Sri Lanka.
Since Sigiriya was abandoned after Kasyapa's death, visitors had been attracted to it from around the 6th century till about the 13th century.
They had come to see the paintings and the palace on the summit and the garden below, even as they do today. Inspired by the wonder they saw, they transferred their thoughts into poetry, which they wrote on the Mirror Wall.
(Just to give some ex:)

We came and as we looked
At these golden-co loured ones
The gave us no speech
But only glances from their motionless eyes.
Fair damsel!
Standing on the mountain side
The blue water-lily of your eye
Has been illumined
With the lust re of the jewels of your teeth
But,do speak out your heart
Albeit gently.....